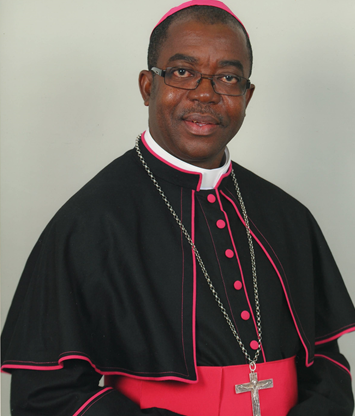 Most Rev. Henry Aruna was born to the Late Mr. Matthew J. Aruna and Mrs. Margaret M. Aruna, a Catholic couple, on the 2nd August 1964. The young Henry Aruna was given an infant baptism at the Holy Spirit Parish, Kenema, then the College Chapel, in 1968.

He attended St. Paul’s Primary School Kenema, RC School Kanike, RC School Fadugu and RC School Kabala in the 1970s. It was during his secondary education at Holy Trinity in Kenema that Most Rev. Henry Aruna felt the call to the Catholic priesthood. He entered the then St. Kizito’s Junior Seminary in Kenema. After his GCE O’levels and Spiritual Year at St. Kizito’s Pre- Major Seminary, Most Rev. Henry Aruna entered St. Paul’s Major Seminary in Gbarnga, Liberia in 1985. He finished his seminary training in Makeni and was ordained to the deaconate in 1992 by Most Rev. George Biguzzi at the St. Francis Chapel, off Azzolini high way, Makeni. He was ordained to the priesthood on April 16th, 1993 in Kenema by Most Rev. John O’Riordan C. S. Sp.

After his priestly ordination, Most Rev. Henry Aruna worked in the Diocese of Kenema from 1993 to 1994. He also worked in the then Archdiocese of Freetown and Bo from 1994 to 1995, in the Diocese of Kankan in the Republic of Guinea from 1995 to 1996 and in the Diocese of Makeni from 1996 to 1999.
He served in various capacities in the pastoral field, interspersed with studies. In 1996 he entered the priestly formation ministry, at St Paul’s Major Seminary, Makeni and Freetown (Kingtom and Regent) where he served for almost 13 years. In the seminary, Most Rev. Henry Aruna lectured courses in History and Systematic Philosophy. He also served in administrative roles in the seminary as Director of Pastoral Work, Dean of Students and Seminary Bursar. In addition to his official seminary duties, he was the priest-in-charge of the Blessed Michael Tansi Catholic Community at Goderich barracks, Our Lady Star of the Sea Parish in Juba, Freetown.

Most Rev. Henry Aruna holds a Bachelor of Arts (BA) degree in Philosophy and Humanities, a Bachelor of Divinity (BD) degree in Theology, a Licentiate in Philosophy (M. Phil), and a Masters in Education (M. Ed) majoring in Educational Administration. He also has a certificate in Counselling Skills, Christian Leadership and Spirituality from the Institute of St. Anselm in the United Kingdom.
Most Rev. Henry Aruna was still lecturing in the Major Seminary and serving as Secretary General and National Director of Pontifical Mission Societies (PMS) for the Inter-territorial Catholic Bishops’ Conference of The Gambia and Sierra Leone from 2007 until January 7th, 2012, when he was appointed the first Sierra Leonean Bishop of Makeni. He is the third bishop after Bishop Augustus Azzolini (1962-1986) and Bishop George Biguzzi (1986-2012).

On the 18th July 2012, His Holiness Pope Francis made Most Rev. Henry Aruna a Tutelar Bishop of Nasbinca and transferred him from the See of Makeni to the See of Kenema, as Auxiliary Bishop. He was received on the 27th September 2014 at St. Paul’s Cathedral in Kenema. On the 27th January 2019 Most Rev. Henry Aruna was appoint 4th Bishop of Kenema and was installed on the 1st March 2019.