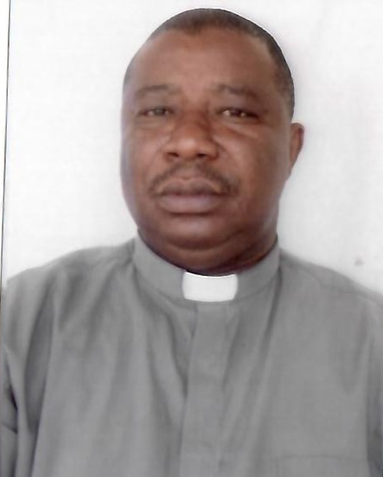 Rev. Fr. Augustine Dauda Amadu is a Catholic Priest incardinated in the Diocese of Kenema. He hails from Boajibu, Simbaru Chiefdom in Kenema District. He started his primary school in Boajibu and later completed in Bo where he sat to the Selective Entrance Examination in May 1992. In September 1992, he gained admission at the Government Secondary School (Bo School). Fr. Augustine took the GCE/Ordinary Level Examination conducted by the West African Examination Council in May/June 1997 and passed with second division.

During his time in secondary school, Fr. Augustine came in contact with so many Sierra Leonean Priests. These contacts were not in vain as they served as seed beds for nurturing a desire which eventually led him to a priestly vocation. After securing the basic academic requirements for admission into the seminary, Fr. Augustine was admitted at the St. Kizito’s Pre-Major Seminary for a year of spiritual preparation before entering the Major Seminary.

From 1999 to 2003, Fr. Augustine studied Philosophy and Humanities at the St. Paul’s Major Seminary in Freetown leading to a Bachelor’s degree in Philosophy. Fr. Augustine did a year of pastoral work at St. John’s Parish in Kailahun. In September 2004, he returned to St. Paul’s Major Seminary to continue his studies in theology. Fr. Augustine completed his seminary studies in 2007 and was awarded a Bachelor of Sacred Theology by the Pontifical Urban University. He was ordained a Deacon at the seminary chapel on 6th May, 2007 by Most. Rev. Patrick Daniel Koroma (RIP), then Bishop of Kenema. He did his diaconal ministry at St. John’s Parish in Kailahun.

On 29th December, 2007, Fr. Augustine was ordained to the priesthood by Most. Rev. Patrick Daniel Koroma (RIP) at an occasion marking the close of the centenary celebration of the Holy Rosary Parish in Blama. After his ordination, he served in the following parishes: Associate Pastor in Uganda Martyrs Parish 2008-2009, Associate Pastor in Holy Spirit Parish 2009-2013, Associate Pastor in Uganda Martyrs Parish again from 2013-2016. Between the years 2016-2018, he was sent for a postgraduate studies at the Catholic University of Louvain in Belgium. He completed with a Research Master: Master of Advanced Studies in Theology and Religious Studies and the canonical licentiate in Systematic Theology.

Upon his return home, Fr. Augustine served briefly as Assistant Administrator of St. Paul’s Cathedral in Kenema and was later appointed as Pastor of Immaculate Conception Parish in Kenema. Besides pastoral assignments, Fr. Augustine has also been entrusted with various administrative responsibilities within the Diocese of Kenema: Secretary to the Bishop 2009-2013; Vocations Director 2009; Director of Biblical Apostolate 2009-2016; Diocesan PMS Director 2009-2013; Acting Principal of St. Patrick Boys Secondary School 2013-2016. Fr. Augustine is currently the Coordinator for Catholic Schools in the Diocese of Kenema.