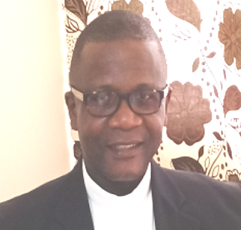 From Yengema Secondary School, he entered Saint Kizito’s Pre-Major Seminary Kenema where he spent two years doing academic work and spiritual year respectively.
In 1990, he entered Saint Paul’s Major Seminary in Makeni, where he studied Philosophy and Theology. He was ordained a Deacon on the 18th April, 1998 by Most Rev. John O’Riordan C.S.Sp. (R.I.P).
On completion of his Seminary formation, he was assigned to Guinea to work with the Liberian and Sierra Leonean refugees in the Diocese of Kankan. He was ordained a Priest in Guinea, on the 11th April 1999, by Most Rev. John O’Riordan C.S.Sp., who was the Bishop of the Diocese of Kenema at that time.
In 2002, he returned to Sierra Leone and was appointed Parish Priest of Saint John’s Parish Kailahun and Saint Joseph’s Parish Koindu by Most Rev. Patrick Daniel Koroma (R.I.P.), then Bishop of Kenema.

He was relieved of his duties as Parish Priest of Saints. John and Joseph in 2007 and from 2007 to 2015 he studied at the Pontifical Gregorian University in Rome where he obtained bachelors, licentiate and doctorate degrees in History and Cultural Heritage of the Church.
From 2010 to 2017, he exercised pastoral ministry in various parishes in the Diocese of Modena and Nonantola, (Italy) as a “Fidei Donum” Priest.

Very Rev. Fr. Stephen Tamba Cornelius Kumasi returned to Sierra Leone in 2017. He took up appointment in Saint Paul’s Major Seminary as lecturer and formator in September 2018. A year later, he was appointed Bursar of the Major Seminary. With the appointment of His Excellency, Most Rev. Henry Aruna as Bishop of Kenema, Very Rev. Stephen Tamba Cornelius Kumasi was asked to return to the Diocese to serve as Vicar General and Administrator of Saint Paul’s Cathedral, Kenema, “Ad MAIOREM DEI GLORIAM.”